My very first comedy was called Vultraz's Diner; if you were to find it, and then read Tahu vs. Tahu, you would immediately find a significant improvement. My best (and only long running) script comedy (as opposed to the prose of Vultraz's Diner and Tahu vs. Tahu) is How to Be a Hero.

Each part of my Comedies Career is dedicated to my most recent Comedy hit at the time; Vultraz's Diner, Tahu vs. Tahu, and How to Be a Hero.

I've been writing comedies on BZPower since January 2009, virtually the moment I joined. In 2009, being new to writing comedies and the need to update regularly, I had few followers and my comedies soon died; the best one being Vultraz's Diner, which managed to scrape a total of 31 posts, the final one being in February 2010.

In 2010, after the dismal failure of Vultraz's Journey (the sequel to Vultraz's Diner), I took an extended hiatus from Comedies. However, in April, the fourth Comedies Contest spurred me to write an entry; though it did very poorly (as I had anticipated), it re-lit the comedy writing spark inside me; I was back. In May, I released The New Vultraz's Diner, a revamped Vultraz's Diner that was completely re-written with a brand new plot. It became my biggest success, in the end getting up to two pages before ending in September. There were rough patches; during the summer I wasn't very active, lowering the number of updates in all of my comedies. However, afterwards I began The Hilarious Misadventures of Vultraz, the sequel. Much to my gratitude, it was not a failure like Vultraz's Journey, and broke all the records that The New Vultraz's Diner had set, becoming my most popular comedy. It ran until December, where I planned to take a month long hiatus to sort my thoughts after constant updates. Except, that didn't happen.

About two weeks later, the idea for Tahu vs. Tahu (or TvT) came to me; however, I was worried it wouldn't be very popular; fans weren't expecting my return until January, where I was supposed to launch Vultraz vs. The World to them. I was afraid that it would also seem too similar to the online machinima series Red vs. Blue, as well as the professional film series Toy Story. Regardless, I launched it on December 20th, 2010; and it became an instant success. It took me by surprise; I became so busy with school and Tahu vs. Tahu that Vultraz vs. The World was delayed in both planning and release to March 2011.

With the finale of Civil War and the launch of Invasion, Tahu vs. Tahu took over; Vultraz vs. The World and by extension, The Vultraz Series, were put on hold indefinitely. Since then TvT has risen in popularity, though it has of course had its downs.

With Invasion completed, Tahu vs. Tahu: The Tournament has been launched; set up similar to the NHL Stanley Cup Playoffs, it will last six chapters before Season 3: Aftermath is released. Unfortunately, the entire series has been on hold since April 2011 due to the forums being taken offline for upgrades, along with the rest of my Comedies.

The forums were taken offline directly after both MT and I pulled a prank on my fans, spreading the word that I would never write a comedy again. Everyone fell for it, and I was intending to use the prank as an excuse to leave Comedies for a two week break... BZPower killed that thought. With the forums offline, I vanished completely from all BZPower related websites... it was questionable whether or not I would return again.

The hiatus was over.

During this absence I didn't desert Comedies entirely; a rough storyline plot for each chapter of Tahu vs. Tahu: Aftermath was created, with a paragraph given to each chapter. A similar thing occured with Vultraz's Journey Returns, and Vultraz's Diner Anniversary Edition received slightly similar treatment as well.

With the new forums back online, I began to make serious preparations for The Great Comedy Crossover, preparing to begin my attempt at publishing all the chapters of Vultraz's Journey Returns and Tahu vs. Tahu: Aftermath at a breakneck pace, as well as write my numerous side projects alongside them. Zaktan's Tale, the second annual Vultraz Halloween Special was released, my first brand new comedy on the new BZPower. Brotherhood of the Time-Travelling Warlords was also re-released, although Chapter 3 is still incomplete.

A similar outline to Tahu vs. Tahu: Deconstruction was created similar to the one done for Tahu vs. Tahu: Aftermath. ORIGINS also entered planning and writing, and is the official history of ALMIGHTY, and how he came to absolute power. Project V also continued to be planned, and has gone through several different plot ideas; the plot is still undecided.

ORIGINS has since been put on hold, along with all Vultraz comedies and the newly released Tahu vs. Tahu: Vultraz's Diner. Tahu vs. Tahu has been reduced from a recent plans of six seasons back down to the originally planned four seasons; Deconstruction will detail the final days of the Tahu vs. Tahu war, with appearances by the Throwbots.

However, in January of 2012 I made a third breakthrough, which is appropriate since the first (Vultraz's Diner) has been cancelled. How to Be a Hero was launched as a oneshot in early January 2012, and due to the intensely favourable reaction and clamoring for more, I turned it into my newest comedy, and the least story-centric comedy I've written.

I continued like this, writing many comedic comedies through 2012, including finishing Tahu vs. Tahu: Deconstruction in September, leading to a brand new comedy to be released in December.... 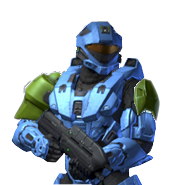 My current appearance online- it has been in use since January 2011, and will probably only be replaced by a Halo: Reach version of the suit. 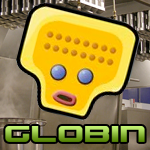 My appearance from July of 2010-October of 2010, when I had a mini-obsession with the different "emoglobins" in Mario & Luigi: Bowser's Inside Story. 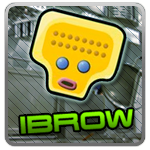 My appearance directly after my obsession with emoglobins ended... sort of. 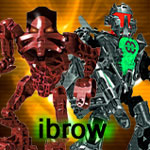 A personal picture I used from November of 2010 until January of 2010. The Dunkan Bulk is a prototype image, and the Nintendo logo is unseen in the background. Vultraz is just cool.

To be honest, I'm not sure when this was made. It's not Cherixon's best work, but it's the earliest he did image work for me. More recently he's made all of the banners for the Tahu vs. Tahu series. 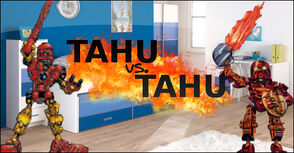 The official banner for Tahu vs. Tahu (the comedy as a whole). Originally intended to be for Season 1, I've since decided that it suits the entire comedy better. 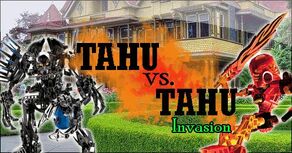 The banner for Tahu vs. Tahu: Invasion Episode 1. This was the second Tahu vs. Tahu banner made by Cherixon, and the banner that cemented him as my "go-to" guy for these banners. 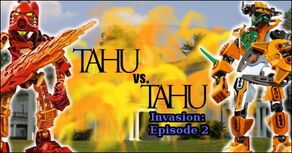 The official banner for Tahu vs. Tahu Season 2: Invasion Episode 2, also made by Cherixon. Something about the first Season 2 banner was off, but this one perfected it.

The banner for The New Vultraz's Diner, released in 2010.

The banner for The Hilarious Misadventures of Vultraz, the sequel to TNVD. The banners for both comedies were made by Reznas Nui.

Another banner for The New Vultraz's Diner (and me), made by Lunekk.

The banner for the unreleased Vultraz vs. The World, made by Click23. Outside of the banner for Tahu vs. Tahu: Aftermath, this might be the most beautiful banner for one of my comedies I've ever seen. 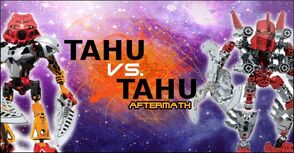 The banner for Tahu vs. Tahu Season 3, also made by Cherixon. Originally another banner featuring Pridak and Mantax was going to be made, but plans fell through. 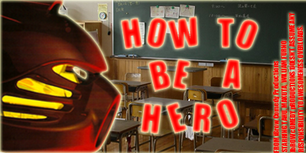 The banner I created for How to Be a Hero.
Add a photo to this gallery
Retrieved from "https://bzpcomedy.fandom.com/wiki/Ibrow?oldid=6317"
Community content is available under CC-BY-SA unless otherwise noted.